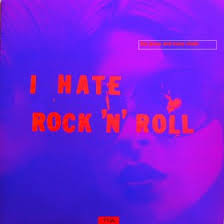 The Jesus and Mary Chain were formed in East Kilbride, Scotland, in 1983, by the fractious songwriting partnership of brothers, Jim and William Reid. In fact, the Reid brothers’ relationship could be even marked by explosions of physical violence. Despite this, and influenced by a variety of artists, including the Velvet Underground, the Stooges, the Shangri-Las, Suicide, Einsturzende Neubauten and early Pink Floyd, their feedback-drenched but sweetly melodic first album, Psychocandy, was released to massive critical acclaim.

Released in 1995, and appearing on the Mary Chain’s Munki album (1998), I Hate Rock n Roll is a wonderfully acerbic, spite-filled and withering attack on commercial and corporate aspects of the music business, and the media coverage that the band “enjoyed”. It radiates the immediacy and rawness of a live recording, with a one-take, cathartic feel. It has to be one of my favourite Jesus and Mary Chain tracks. The album is largely ignored in discussions about the band’s career and discography, the perceived wisdom being that the Mary Chain were on a gradual downward slide ever since the release of the stunning debut, Psychocandy. Generally, this is true, but there are huge high points on every album they ever released. And this is one of them. Written at a time when the Reid brothers were barely talking to each other, (in fact they recorded their parts separately), the album mirrors this dichotomy and division by the inclusion of another track, I Love Rock n Roll, written by Jim Reid, as a counterpoint to William Reid’s I Hate Rock n Roll. Their trademark early sound of skirling  feedback was even forged as a result of conflict – at the sound check before their first London gig. Jim was apparently furious at the wall of feedback emerging from William’s amplifier, a “mistake” that would soon become their trademark sound.

After disbanding in 1999, the band reunited in 2007. The new 2017 album’s title, Damage and Joy, seems to capture this bitter-sweet essence of what it is to be in the band.