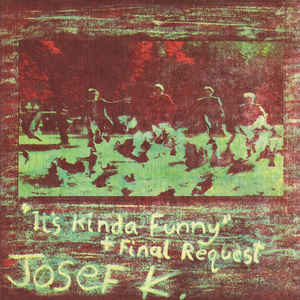 This Edinburgh-based band, led by Paul Haig, and named after the protagonist of Frank Kafka’s novel, The Trial, were signed to the legendary and effortlessly stylish Postcard Records label of Glasgow. The label proclaimed with breathtaking assuredness that it was the “Sound of Young Scotland” during its short existence between 1979 and 1981, and became the benchmark of indie-cool.  Josef K indeed remain, to this day, the quintessential embodiment of an art-school-meets-literate-post-punk-chic – narrow suits, skinny ties, spiky hair, and well-read. (Just ask Franz Ferdinand, who have clearly embraced the Josef K aesthetic). Always, however, in the long post-punk shadow cast by their more well-known and commercially accessible label-mates, Glaswegian band Orange Juice, Josef K were heavily influenced by the art-punk of bands like Televison and Pere Ubu, and the dissonance and experimentation of short-lived New York No Wave movement of the late 1970s, which rejected even punk rock as cliched. The band, however, broke-up in August, 1981, because of a combination of factors – unfulfilled early promise, poor financial returns, a dislike of touring, and disagreements over future direction being chief amongst them.

This song, released in 1980, was their third single, and appears on the only studio album released during their existence, The Only Fun in Town (1981). It combines a strong feeling of reflective melancholy with an air of impending menace, and is a typical Josef K song – jangling guitars on the brink of atonality, emotionless vocals, thought-provoking and cryptically ambiguous lyrics, full of metaphor and imagery. The single version has an immediacy and more spontaneous feel to it than the version that appears on the album, and that is the version that I include here. Though a less up-tempo track than was usual for the band, it remains a great place to start to get to know Josef K.