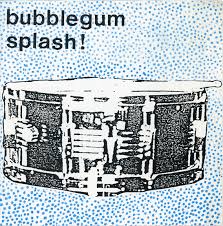 Bubblegum Splash! were a short-lived indie band from Salisbury, England. The band featured Jim Harrison, Alan Harrison, Dave Todd, Marty Cummins, and Nikki Barr. The group disbanded in 1988. They recorded for indie label, the Subway Organisation, and their only release, (apart from an appearance on a split flexi-disc with the Darling Buds), was the 1987 EP “Splashdown”. Plastic Smile is taken from this EP.

The record showcases the typical sound, image and approach of the so-called post-post-punk “twee”, “shambling” “anorak” or “C86” movement, which churned out short, sweet and almost childlike pop melodies usually sung by girls, set against knowingly sloppy, fuzzed-out and feedback-seasoned guitars, and primitive drumming and tambourines. The sound had its roots in the Ramones’ minimalist three-chord structures, 60s girl group meldoies and harmonies, the buzzy punk-pop of the Buzzcocks, the DIY post-punk pop of Glasgow’s Postcard scene bands, (like Orange Juice), the Jesus and Mary Chain’s feedback-drenched melodies, and the melodic but raw sounds of early 80s bands like the Pastels and Television Personalities. The Scottishness of some of the key influences, (Postcard, Orange Juice, the Jesus and Mary Chain, the Pastels), perhaps explains why a plethora of these bands came from Scotland – e.g. the Shop Assistants, Jesse Garon and the Desperados, the Clouds, the Soup Dragons, the Fizzbombs, Baby Lemonade, the Bachelor Pad, Rote Kapelle, to name but a few. Supported by a virtual industry of DIY pop fanzines and free flexi-discs, both the bands and fans tended towards a certain look – 60s-style bowl-cuts, anoraks or leather jackets (not the punk or biker kind), stripey t-shirts (essential), tight black trousers and winkle-pickers. This scene, which only really lasted a couple of years, and ran out of steam by around 1989, (being the key influence on the so-called “Shoe-gazing” scene of the early 90s), is catalogued in Sam Knee’s A Scene in Between book. I was very much part of it, back in the day, (complete with bowl-cut, etc, etc.), and had a great time following all these bands around with my goth girlfriend, (who moderated her black lacquered look at these gigs).

But what always annoys me is that there is no settled name for this musical movement, (a fact perhaps demonstrated by the prosaic title of Sam Knee’s book), and the various names that we do have are either pejorative or inaccurate. “Twee” and ”anorak”, make it sound like the scene was a long children’s birthday party, and ”shambling”, (a John Peel-coined description, celebrating the deliberately sloppy nature of the music), suggests the music was crap, which it certainly wasn’t. “C86” is a lazy and inaccurate title, given on the back of the C86 cassette compilation released by the British music magazine NME, featuring new bands licensed from British independent record labels of the time.  (The tape was a belated follow-up to C81, a collection of new bands’ songs released by the NME in 1981 in conjunction with Rough Trade). It is stupid, however, to apply this name to the scene described in this blog post, because the C86 tape had a track list made up of various bands with very different sounds and influences, and cannot be shoe-horned into one scene. Anyway, if anything, bands like Bubblegum Splash! belonged to the class of 1987. So, we need a name for this “Scene in Between”. Any suggestions?